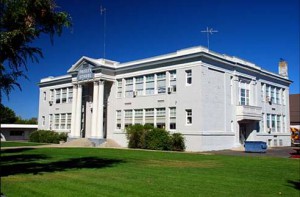 The Paisley School District is critical to the economic well being of the community. If the school ever had to close the economic fall out would be considerable as students would have to travel 90 miles/day to attend school. This would mean employers like the Forest Service would not be able to attract employees with school age children and this would be a big blow to the community. Since the closing of the Paisley Mill in the 1996 , the school had to take innovative steps to keep its doors open. The school is best known for welcoming foreign students into its classrooms as a way to boost classroom size.

Not as well know, but almost as smart, was using stimulus money to reduce the school’s energy costs. The school was built in 1905 and in 2010 still had the original single pane windows and fuel oil boiler. Stimulus dollars allowed the school to upgrade the windows reducing energy costs significantly. Now LCRI and the Paisley School District are exploring ways to further reduce the school’s energy bill and increase its fiscal stability. The current cost of fuel oil to heat the school is over $50,000 per year which could be reduced by 65 to 75 per cent with a new renewable energy heating system. Fuel oil is now over $4/gal and it will continue to rise. LCRI assisted the school in applying for a Cool Schools Feasibility Study Grant through Clean Energy Works Oregon that will allow the school to compare costs of three different renewable energy systems to reduce those costs significantly. The three systems to be investigated are geothermal, biomass boiler and ground source heat pump.

Stay tuned and we will keep you posted on the results of the study.