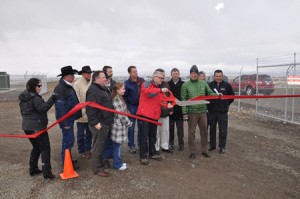 November 9, 2012 was a great day for Lakeview and Lake County as Pacific Power held a ribbon cutting
ceremony for their 2MW Black Cap Solar Project. The project has 9,000 solar panels that will produce enough electricity for 400 homes. The day was cold, snowing and windy; even with these conditions and with cloud cover the solar project was producing at 30%. Pacific Power sent all their top Executives including Pat Reiten, Pacific Power president and CEO to the ribbon cutting and following the outside event Pacific Power had a terrific lunch at the Gathering Place.
Swinerton, Inc. was the construction company for the project and used about 80% local contractors on the project. While solar projects do not create many permanent jobs they do create construction jobs and pay taxes. In a county that is 78% government land, means 22% of the private lands pay for the amenities that the general public wish to have such as roads, excellent hospital, good schools, etc. The amount of taxes paid will vary with the size of the solar project but this graph is an example of a solar project in Lake County. We currently have two solar projects completed, another one that is going to be built. Pacific Power has a need to build additional solar projects to meet Oregonâs Portfolio Standards for solar and hopefully Obsidian Finance will get the bid here in Lake County and when finished Pacific Power will take over ownership. Start multiplying the figures in the graph and solar will definitely help maintain and provide jobs in all the respective taxing districts.

Obsidian Renewables, LLC was the primary contractor for building Black Cap and Outback solar projects and is proving to be an excellent community member. Adjoining Black Cap is Obsidian’s 366 kW solar system, that will transmit operational data directly to Lakeview High School as well as LCRI,Â  where it can be used in classes to teach math and engineering concepts. Utilizing LCRI, Obsidian prepared a Blue Sky grant and will be building a FFA/4-H barn on the acreage at Black Cap that will be utilized for students that want to raise animals but don’t have a place to keep their animal. Electrical power to the barns will be provided by the project. Lake County OSU Extension Service is working with the Lakeview High School to build the barns in sections at the school, that later can be put together at the site.

The Black Cap Solar for a short time was the State’s largest solar project. Constellation, an Exelon Company out of Chicago, just completed a 5MW project in Christmas Valley making it the Stateâs largest. Element Power has purchased the development rights from Lincoln Power and possibly will build even a larger solar project. So with these projects it looks like Lake County will continue to have the Stateâs largest solar energy projects for some time into the future.

Another positive development is the Paisley Geothermal project. When drilling the reinjection well for 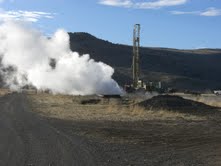 the City of Paisley geothermal 2MW plant they hit another excellent source of geothermal and as a result the project will be a 3 MW plant. For the second time when drilling for a reinjection well they have hit a better and hotter source of water. The plant is currently under construction and the generator will be delivered to the site in April 2013.
On this website under about us and under publications there is an economic report by Richard Gardner outlining the job potential for these Utility Scale type projects, see Table 5. Oregon Business tells us that every job created in rural areas such as Lake County is equivalent to 100 jobs in Multnomah County.
In 2008 the Lake County Renewable Energy Working Group set a goal of producing more renewable energy than can be consumed in Lake County by December 2012. This was right before the recession and as a result we will not make the December 2012 goal. While that is the bad news, the good news is we anticipate making that goal and we estimate it to happen in 2013-2014 depending upon market turn around.